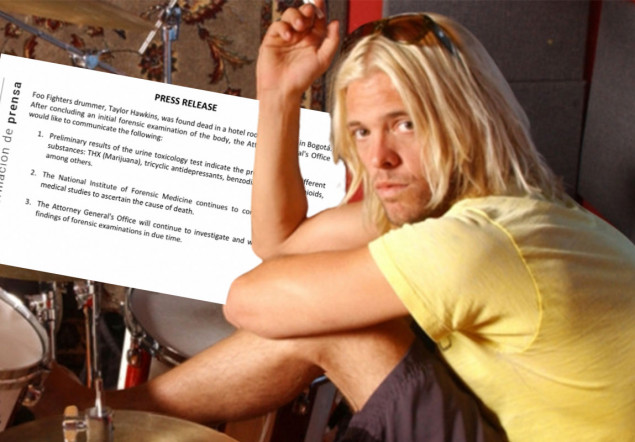 Bret Michaels: “On behalf of Bret, all at Michaels Entertainment Group, band, crew and office staff – our thoughts and condolences go out to the family, friends and fans of @foofighters #TaylorHawkins. – Team Bret”

Slash: “Devastated by the loss of our friend #TaylorHawkins I’ve no words to express all the feelings I have about his passing. But my heart goes out to his family. & his band & friends. RIP Taylor”

The Doors: “The Doors team is deeply saddened to hear about the passing of Taylor Hawkins, the @FooFighters’ ferocious drummer. Taylor was definitely a one-of-a-kind person, and an incredible musician. In 2016, Hawkins joined Robby Krieger and John Densmore in Los Angeles…”

Def Leppard: “RIP #taylorhawkins ‘I’ve just woken up to the horrible news of Taylor’s passing. I’m in a state of shock & sadness. He was the epitome of the modern day rock star & inspiration to kids everywhere, including this rather old one. Deepest sympathy to his family, friends, fans’– Sav”

The Offspring: “Shocked and saddened to hear of the loss of one of rock’s greatest drummers. Our hearts go out to the family and friends of Taylor Hawkins tonight.”

Joe Perry: “I’m greatly saddened today after hearing the news about TAYLOR HAWKINS. He was one of those absoloutly rare people ya just couldn’t help feeling good around him. You see he loved his family and life thru and thru… And he was a ripping drummer… TAYLOR you will be missed!!”

Lenny Kravitz: “A rock and roll brother has gone home too soon. My deepest condolences to his family, Dave Grohl, and the @FooFighters. Taylor played from the heart with power and joy. May he Rest In Peace.”

Gene Simmons: “Hearts broken all over the world. Taylor Hawkins was a kind soul & a monster musician. Drummer for the Foos, Alanis Morrisette & Sass Jordon (who I managed for a time). Taylor and his band were to play our Kiss Kruize in Oct…Prayers and condolences to the Hawkins family.”

Weezer: “We are terribly sorry to learn of the loss of our friend and musical brother Taylor Hawkins. So sorry to his family, Dave and the Foo family, and to the legions of his fans. Like everyone who knew him, we loved him. Rock Music wont be the same without him.”
The Smashing Pumpkins: “Taylor Hawkins 1972-2022. Our deepest sympathies to Taylor’s family, his fans, and of course his band.”

Pearl Jam: “Long live Taylor Hawkins. He enriched my life as a dear friend & fellow musician. He brought so much joy to the world of music, he will be forever missed. Our deepest condolences to Alison, Shane, Annabelle & Everleigh Hawkins & the entire Foo Fighters family.”

Axl Rose: “Shocked n’ saddened to hear of the passing of Taylor Hawkins. He was a really great guy, drummer n’ family man. Was always great to see him! Was looking forward to seeing him n’ everyone in Daytona. Truly saddened. My deepest condolences to his family, the Foo Fighters n’ their fans.”

Ozzy Osbourne: “@TaylorHawkins was truly a great person and an amazing musician. My heart, my love and my condolences go out to his wife, his children, his family, his band and his fans. See you on the other side.”

Nickelback: “In utter disbelief at the news of Taylor Hawkins. Our deepest condolences to his family, his bandmates, his team, his friends and everyone that was ever touched by the music he created with @foofighters @Alanis and so many others. This is so incredibly sad.”